I’m sitting around on a bleak Sunday afternoon. The sky is white and it’s unusually cold for Labor Day Weekend. The better-half is away on one of his work-related do-gooding trips to a developing country.

Usually, I use his away time to get shit done, by which I mean household crafty stuff like redoing the kitchen floor in green paper,

or hacking an IKEA table by gluing pages from an iconic 70’s veggie cookbook on it and “marblizing” it with more green paper,

or creating a faux-slate floor on the terrace using (wait for it) leftover package paper!

Sometimes I write snarky blog posts that people actually pay me a pittance for, or fiction that people can buy on the cheap.  It’s not that the better-half’s presence keeps me from writing. He’s at work most of the time anyway. But being alone, not feeling a need to plan dinner with someone, or do the dishes, or anticipate conversations about my day, helps me focus on the writing. Plus there is some feeling that because he is out in the world “doing” something, and being his best self, I should at least make an effort to do that thing I used to think I was put on this earth to do.

But yesterday I “did” nothing. And today? Not very much. Am I depressed or worried? Well, I’m ALWAYS depressed and worried. The things I should be doing to alleviate those “feelings” or conditions seem impossible at the moment. But I’m not not contemplating ways to end my life. My mind has not been taken over by thoughts of some horrific looming catastrophic – although given the current political situation, such thoughts, while not helpful, might not be unrealistic.

But I’m not out womanning the baricades, nor is  my lack of social life an issue. People are harder than math! What keeps me from brooding that my solitude is NOT healthy, that my disconnectedness is hardly an achievement, that I can and should be an active participant, if not the major character in my own life story?

It’s the cats. They love me. I know this not only because a Facebook quiz tells me so. I know this because the little bastards constantly show me and tell me how much they love me. The one we still refer to as the feral – though that’s probably not his real backstory – insists on nuzzling next to my chest even as sit typing these words. His purr is as loud as a fancy Italian milk steaming machine.

The others are nearby, sleeping, but liable to stir if I move. The old one comes to me less, but if I’m out of his sight for too long, he’ll look for me, and harangue me until I follow him. His love requires work. He wants to be brushed, to be fed, to be told repeatedly what a good boy he is while his tummy is rubbed. (And yes, some cats are totally into that. But do NOT try it on the feral. He’d tear you to shreds.)

The middle-child cat is the one who most loves to share the bed with the humans. Do not let anyone tell you that cats don’t know their names. He runs to me when I call him. He’ll allow the others on the bed if I’m watching, but he won’t let them get too close. They’ll stay by my feet.

The husband and I are those people – the couple without children who’ve replaced human larvae with pets, but they are more than surrogate kids to me. They are best friends, companions, and more. I now make sure a dining chair is pulled out to make it easier for the senior cat to climb down to the floor from his favorite spot on the kitchen table.  I cook his special chronic renal deficiency diet because the commercially available prescriptions just aren’t good enough. With all the eldercare I give him, he has become a parental replacement.

Their care regulates me. Keeps me grounded. Jump out the window and end it all? Who’d feed them? And besides unless I stood on the ledge and shut the window before I jumped, which doesn’t seem possible, they might follow me and I wouldn’t want that to happen. Besides the husband has made it clear that if anything were to happen to me, he wouldn’t cook for them.

They are entertainment when I’m bored with traveling the world wide web, and reading is tiresome. They are even something I can share with my virtual friends and followers on social media. The feral likes to go out and see his fans in the neighborhood. Yes, he is that cat on the leash, which you either think is totally something you’d like to do or just weird depending on whether or not you live with a cat.  He forces me to go outside where I must answer – always sweetly – the same questions again and again:

“No, I didn’t train him to do this.”
“Yes, I do think he likes going outside. You can’t make a cat do anything they don’t want to do.”
“Just an alley cat. I found him out here. No special breed.” 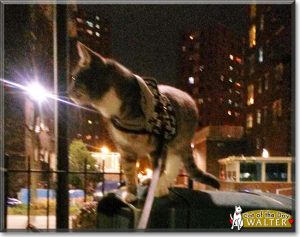 Humans are ungrateful savages. Dogs and cats are better than this. Even the least pedigreed has had love bred into them. And while that love may involve a contract of sorts – feed me, change my litter box, allow me to experience the warmth of sleeping next to your belly – it is not a love that judges.

My cats don’t really give a shit about my salary. They don’t care if my last novel was “agented” or self-published. They don’t care how many followers I have on twitter or which celebrities are among them. It doesn’t matter to them if my family disowned me, if my lovers leave, if my body odor offends most of my own species. My weight is meaningless to them, unless I drop dead and they have to scavenge my fat.

The need to connect is part of being human. It’s why artists of all kinds do what they do. But we don’t necessarily need to connect with other humans. That’s why AI has inspired so much science fiction. In the future, the perfect companion may not be human at all. And we won’t just have robotic spouses or children. Think of a future where you could be the friends with the coolest people who ever lived, or at least facsimiles thereof. Well, until that comes along, a warm furry wannabe vermin catcher will have to do.

If I didn’t have my cats to give me a feeling of love and connection, would I go back to writing because creating something, telling myself a story, is one of the best ways I’ve found to both harness the chaos in my mind, and give me that sense of connection to others (even if those others consist of an audience which is almost entirely imaginary)? Would I be attempting to make plans with friends, even if picking up the phone or texting makes me feel horribly self-conscious, and I’m certain people sense my desperation? Would I get done the many things in the house that I need to get done despite the anxiety and second guessing that comes from “doing” almost anything?

Would I be more functional or less functional without my animal companions?

I’d hate to find out.