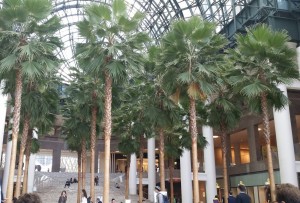 (I’ve got to start writing content for this blog again. In the meantime, I’m reposting this piece from November, which holds up well I think.)

(11/18/16) At this moment, I’m sitting in New York’s Winter Garden, across the street from One World Trade. It was the first place to be rebuilt after 9/11. It’s difficult to believe that was fifteen years ago. And everyone who was in New York will tell you how extraordinarily beautiful the weather was, and that it was a Tuesday. There was no hint of the coming catastrophe. Workers showed up, piling into their cubicles as usual. There were warnings, which were ignored by W and Condaleeza, but we, the people, didn’t know anything about that.

Today is a little colder than that morning was. Of course it’s November already. Almost Thanksgiving. It’s nearly lunch time. Office workers are window shopping on a break, or walking through on their way to the food court. Tourists are taking pictures. There aren’t many homeless people here, which is unusual for New York’s indoor public spaces on a brisk day, but the presence of so many guards must discourage them – or maybe it’s the high end shops– or all the marble. Maybe it’s the grandness of the place that intimidates them though unlike the Timer Warner Center uptown, there are places one can linger here without purchasing anything. 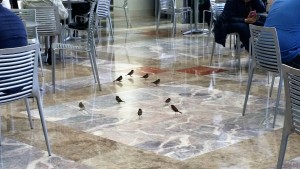 While there may not be many human vagrants, there are sparrows – a flock of them living off tourists’ crumbs (as we all may be soon assuming people can still get visitor visas.) How exactly they came in I don’t know. Have they always been there? The outdoor tables have been removed for the season though people are still strolling by the river. They’ve even opened an ice-skating rink.

It’s all so normal, and yet we are once again on the precipice of a catastrophe. This time we’ve been warned – clearly and over and over again for months.

At first none of us took the threat seriously. How could we? It wasn’t the first time showbiz had entered politics. An actor had even won the presidency, but as absurd as that seemed – and believe me before it happened it did seem absurd, the actor in question, at least had been a union president and the governor of the most populous state. Even without Peggy Noonan, Reagan was Churchill compared to what we have now.

Before the head of the FBI decided to put his thumb on the scales of democracy, people were anxious. While Hillary’s lead seemed solid, she wasn’t leading by much in the places where it counted, her odds rarely got higher than the high 80% and a better than 10% chance of catastrophe was not reassuring, though what happened was a shock. 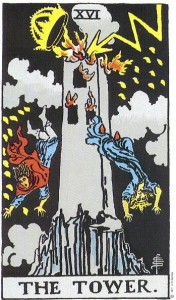 I’d thought a lot, even before the election, of The Tower. As some of you know despite my own skepticism, I read tarot cards, and while I don’t offer a supernatural explanation, I’ve found the results —  more than the odds would have it – astounding. The Tower in almost any deck, shows a building on fire or being struck by lightning. Whatever the image the building is falling, and one or more people are jumping.

What a strange think to be thinking of here, in this place, and now.

The Tower portends disaster, ruin, the destruction of existing forms. When the card comes up in a reading for another person, no matter what “vibe” I’m getting, I try to soften the blow. “Sometimes,” I tell the querent (as readers call them), “Karma needs to burn quickly. Existing forms must die for new ones to be born.” Losing a job, for example, can open the door to a new opportunity. We can be forced to do the things that we probably should have done years before, but didn’t because we were comfortable where we were. Life in suspension by the way, is often represented by the image of The Hanged Man. He is never shown hanging by his neck, but instead we usually see him hanging by his feet, his face an expression of repose. Sometimes we are comfortable, even when we are not free. 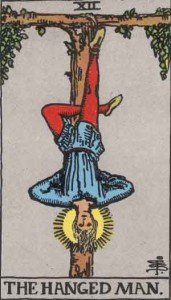 So I here I sit 9 days after. I’m teaching ESL these days. That’s why I’m here. The Winter Garden at Brookfield Place is one of New York’s increasingly scarce privately owned publicly places. Developers agree to allow public access in return for tax breaks or other variances. Trump Tower, by the way, in theory contains a public space, though when a piano player was attracting too much public, Donald Trump fired him, and years before the election security there was known for making it very clear that while the public might have technically been allowed, if they weren’t buying anything they certainly weren’t welcome.

I have spent the last week trying to explain the inexplicable to students from all over the world. I won’t go into detail about those conversations. Suffice it to say that one of my students (from China) found the republican strategy of voter suppression very sound and logical, and was sure Trump (or his advisers) had read Mao, since dividing the country folk from the urban folk was straight out of his playbook.

The students have asked me what I will do, or rather what I can do about the results of an election. The idea to many that I can and should fight the power is strange, especially to those who come from authoritarian regimes. It is also, in their eyes, pointless.

Yet, I have no choice. I’ve already signed more than one pledge to register as a Muslim if it comes to that. I don’t think it will come to that precisely because a lot of other people have already signed such pledges, but I’m certain that something will happen – something more insidious and harder to fight, and in the name of “compromise” or the “horse trading of politics” I don’t trust the democrats to stand firm against all of his excesses.

Hmm – medicare or human rights? What if we can’t have both?

Barring a miracle, in December the electoral college will give Donald Trump the votes he needs to become president, and in January he and his family will be running Trump America Incorporated. Their reign may not be long. There are now betting odds on how soon he’ll be impeached, but the damage is done and more is coming. The republicans have congress, the senate, and the presidency. They will have the supreme court as well. So much for checks and balances. With voter suppression, and by tightening up on immigration and citizenship, they’ll be able to keep a majority even as their natural constituency dies out. And they’ll be able to continue to swing this country further to the right, even as America’s role on the world stage recedes, for better or worse.

I’m old, and feeling older every day. I could see giving up on America, seeing this election as what it was, another battle in a civil war, which never really ended. Is leaving the cowardly thing to do or the smart move? You have no idea how many conversations I’ve had about that in life and online especially with Jews. It’s not that we aren’t loyal Americans, it’s that we grew up asking ourselves what we would have done in Germany after Hitler was elected. The smart Jews left, even if some of them died later because the Nazis followed them.

Is Trump, Hitler? No. We don’t know what he is, but then again the Germans Jews didn’t know what Hitler was – unless they were paying attention, unless they read his words, and believed the words might be more than bluster.

We’re seeing incidences of violence and harassment even in multicultural New York City. The other day a Trump supporter punched a woman in a restaurant in gentrified Brooklyn. Talk about your sore winner! Shortly after the Republican convention, I was sitting at a table in a public plaza outside another of those privately owned places – the Citigroup Atrium. I was with an ESL student from Colombia, and a man took offense at our presence. Maybe he thought the middle-aged woman was one of those Mexican rapists he’d heard about. Maybe he thought that we were lesbians. He made his point by getting up, pushing a metal chair out of the way, and yelling at us before walking away in a huff. I had time to yell back, but in retrospect, I’m not sure how wise that was. He could have been armed.

What it comes to is this: Either we leave, maybe giving up everything we’ve worked for, our friends, our families, our homes, or we stay and fight.

How do we fight? The usual ways – locally and globally. When we see the woman wearing hijab being harassed on the subway, we sit down next to her, and let the harassers know that we are with her, and even though we are armed only with a phone, we will use that. We call our representatives and other representatives frequently and with specific requests. We show up at demonstrations – not every single one of them – but where and when we can because the whole world is watching, and it can make a difference. Maybe we do more. Civil disobedience is as American as Henry David Thoreau.

In the end, we can run or we can fight.  Why fight? As the fictional Victor Lazzlo told the fictional, faux-cynic, Rick, “If we stop breathing, we’ll die. If we stop fighting … the world will die.”

(Marion makes nothing from her blog, and there’s no donate button, but if you want to thank her, you could buy a very cheap e-book, maybe?)