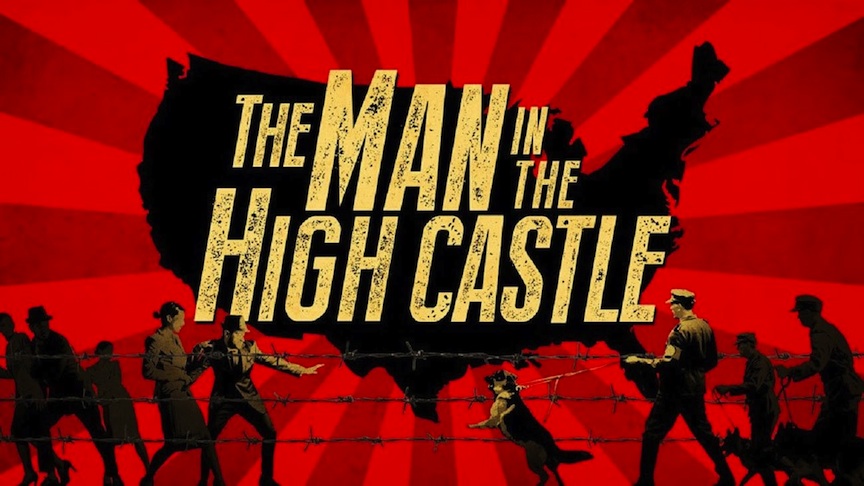 The best (Philip K Dick) novel of all time, The Man in the High Castle will be coming to your favored viewing device on November 20, 2015 – just in time for Thanksgiving, via Amazon. So while your drunk uncle and Trump supporting uncle (who may or may not be the same person) and other assorted relatives are watching the football, you can lean back, plug in your headphones and see the greatest alternative timeline story ever told, on your fully charged phone. That is, if you have access to Amazon Prime. So if you haven’t done the trial membership yet, wait for it.

But here’s the bestest news of all – even if you’re a shlub who blew your Prime trial on Bosch, and you don’t have a significant other or family member willing to trust you with his or her Amazon password, you can watch the pilot episode FREE now (and if you do have Prime you can watch the second episode too).

What is The Man in the High Castle and why would you want to watch it? The Man in the High Castle is the television adaptation of a novel by Philip K. Dick – the man whose books have been the basis for Blade Runner, Minority Report, Total Recall, A Scanner Darkly, The Adjustment Bureau and more. It’s set in a world where FDR is assassinated in 1933, the US never gets over the depression, Kirk never lets Edith Keeler die, and we lose World War II. The post-war US is divided by Japan and Germany. Japan controls the West Coast, the Germans have the East Coast and most of the rest. The Rockies form a buffer zone. The novel takes place in 1962. There’s a novel within the novel called The Grasshopper Lies Heavy, which offers an alternate history – not ours – but closer to it. In that version,  Germany and Japan are defeated, but Russia barely makes it through. The US and Great Britain emerge as the world’s two competing super powers.

In 2010, the BBC announced a planned four-part adaptation, with Ridley Scott as Executive Producer. Five years later with Scott still at the helm and no BBC involvement, it’s here. Why haven’t there been previous feature films? Possibly because the tone of the novel is so dark and humorless, and the ending doesn’t feel like one. Dick planned on writing a sequel. A couple of chapters exist, but he abandoned the project finding it too unbearable to read more about nazis and try to get into their heads.

Amazon refers to “season one” availability, so it’s unclear whether or not they’ll be following the book’s storyline, or going past it to create a broader series about life under occupation or giving us the sequel Dick never finished. The pilot follows the book’s plot with some variations, but not enough so far to cause this fan to go ballistic.

The biggest difference so far is that in the adaptation, The Grasshopper Lies Heavy is a film, not a novel. It looks like an authentic World War II era newsreel. Some people believe it is, and that belief causes the nazis to make even watching it an act of treason punishable by death. Others believe it is merely anti-fascist fiction. In both the novel and the series, the actual man in the high castle is the creator of the work. Why a newsreel rather than a novel? Maybe it’s simply a matter of one being more visual than another. We can experience a film within a film and watch it with the characters, a book within a film is tougher.

The pilot, like the book, is uncompromising in its bleakness, and then in episode two the darkness is magnified. Imagine if you will, living in a world that totally sucks and Jon Stewart was never born because his grandparents were wiped out. Amazon seems to be attempting irony in one of its promos – which doesn’t jibe with the tone of the pilot. They  use the song Edelweiss from The Sound of Music over the opening credit sequence, but this is not satire, so don’t expect The Confederate States of America. But if you are a sucker for parallel/alternative realities, this is the mother of them all.

Enjoy (if that’s the right word) this official promo:

(This piece will appear soon on Happy Nice Time People where you can see more of my writing about television. If you can’t get enough of alternate timelines, you might want to check out this little novella. And remember, nothing says thank-you for offering all this free stuff with no intrusive advertising like buying one of my cheap books and maybe even writing a glowing review.)