Some troll, not Anne Rice, but one of the gamergate boys she regularly sends out to harass anyone who’s crossed her because that’s her thing, (yes I know how insane that sounds) is posting lies about me in the comment section of an article on The Guardian because I said some things in reference to the subject of the article that he apparently disagrees with. I’m not sure, since his comments weren’t about his actual opinion, just about people he apparently wants a flame war with.

Specifically, one of the lies he’s telling is  about my facebook posts to Anne Rice’s facebook fan page (basically he said that I was a crazy person whose posts had so upset Ms Rice that she had to stop posting.)  So here are the screenshots of what I actually said and how she responded. This was about that holocaust nazi love story written by Kate Breslin, and my remark about Breslin’s wanting to use it in schools is true. She was giving away copies for Yom Ha Shoah to libraries and schools. Now that’s chutzpah! And no, I don’t think a public school would touch it, but there are lots of private religious schools in the south where textbooks aren’t very factually based. (Update: Think of this as the prologue to posts Part I and Part II on Anne Rice’s facebook battle in her continuing war against people who leave negative book reviews immoral internet lynch mob bully gangsters. 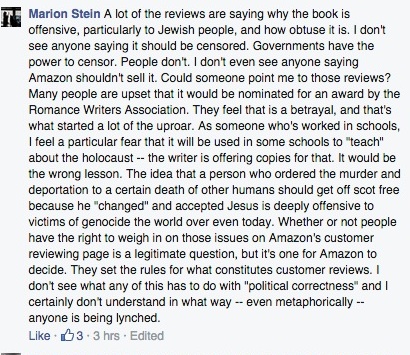 Anne Rice’s response. She’s wrong about her entire description of what’s going on, in ways it would take several paragraphs to explain, but it’s her facebook page so she can say what she wants:

I’ll admit I did take offense both at her use of the word “incendiary” to describe my comment, and probably more than  I should have at her use of the word “disingenuous” to describe me. (I remembered it as “dishonest” and “disingenuous” but I see in the written record she only went with “disingenuous.” Possibly, I wouldn’t swear to it, she used “dishonest” later in her “you’re dead to me and banned for life kiss off'”(Sarcasm! She did not literally say, “You’re dead to me.” That’s Stephen Colbert.) There are many things I am. Disingenuous isn’t one of them.  So maybe I lost my temper. In the interests, however, of full disclosure, here’s my final comment to her. After that, she didn’t name me again but made a general statement about banning people and deleting their comments. Something along the lines of it being something she hardly ever does. Some people on the internet found that one hilarious. (She does it all the time, but not as much as she deletes her own comments.)

My last words before being banned for life from Anne Rice’s fanpage: 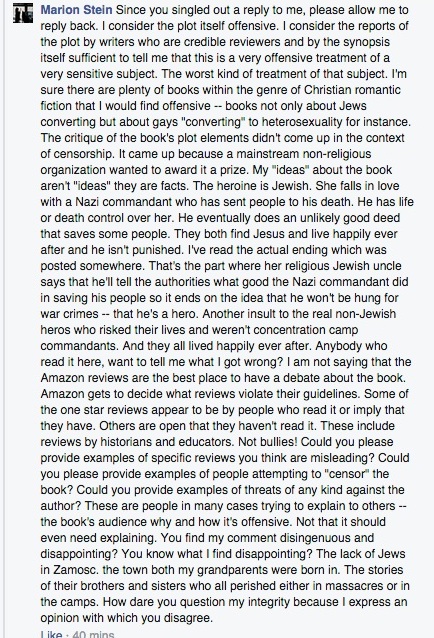 So I’m just posting this not incredibly interesting exchange to set the record straight. Not that I’m grandiose enough to believe that anyone cares about “the record,” but I’ve been warned the internet is a dangerous neighborhood.  I just don’t like this momzer going around blatantly lying about me. Is that too much to ask? I probably shouldn’t take him so seriously but he’s involved with the gamergate people and that’s a pretty rough crowd. They might publicly out me as  a feminazi — which is word they love to throw around because they couldn’t come up with anything original, but if you give them any backtalk about it, they throw out the “pc” word and accuse you of censoring them. He has also been known when he wants revenge to write articles for some site that loves to trash those uppity ladies. Again, I’m pretty small potatoes, and while I do have books out there and blog, I’m not exactly one of those public people you bother doing an exposé on.

Am I wrong in thinking he posted about me — not a public figure, just a schlub with a blog, in order to intimidate me? Is it crazy for me to wonder if Anne Rice, a woman with over a million facebook follows and a history of lashing out at people even for writing a negative review of her work (and sometimes sending her minions followers to lash out) could have sent him?

As you can tell I’m a scared. (For the irony deficient, that last sentence was sarcasm by the way.)

On a totally lighter note because even thinking about all this is kind of a drag, here’s a link to a biographical piece about my geat-grandfather, pastry chef, novelist, playwright, and composer (of an opera no less) Berrish Beckerman. I believe my cousin has been searching for the manuscript of his memoirs and any other existing manuscripts at YIVO.  Per the article he immigrated to the US in 1914 — lucky him! Here’s a photo: 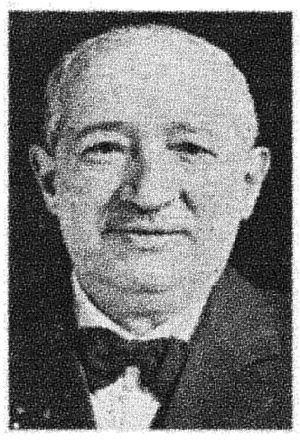