There’s been a little confusion. Apparently some people believe that parody reviews, protests and petitions constitute Internet  “mob justice” and/or  “vigilanteism.  First off, protesting outside the office of the coward that shot Cecil is exercising free speech. It’s not “mob justice”. It’s not even the Internet! Second, leaving stuffed animals outside his office is not a serious threat. Phrases like “rot in hell” which was written on one of the signs at a recent protest, are powerful words, but folks have the  right to use them. Also sticks and stones, etc. I’m pretty sure a real he-man what shoots cats with arrows from a truck with a spotlight isn’t afraid of some itty-bitty bad words. Leaving parody reviews on someone’s yelp page is not vigilanteism either.

The writer of the piece linked above complains that if Palmer loses his livelihood, others, like his family will suffer. Huh? Is that ever a reason for someone depraved to be able to hold on to a medical license? Since when did, “Yeah, I’m guilty and not fit to practice, but I was hoping my kids could afford to go Ivy, so cut me a break?” become a defense? Seriously, would you want this man poking his fingers into your mouth? Your children’s?

I’m not crazy about doxing, which apparently Mia Farrow did on the twitter, but Palmer’s address was public and available to anyone who spent five seconds on google.

You know what vigilanteism is? It’s tens of thousands of people who were dragged from jails or their homes and lynched without trial or even charges right here in the USA up until not that many years ago. It’s girls being shot down by the Taliban for going to school. It’s police shooting people dead or choking them or murdering them in other ways for minor crimes or no crimes at all. Sometimes it’s even beheading. Uh, wait a second…

I’m not sure what the protestors outside the dentist’s office would do if they could get their hands on him, but I’ve seen footage. It’s mostly women and small children. I don’t see too many (or any) baseball bats, or ropes for hanging. Maybe they would suffocate him with plush toys, but I doubt it. For one thing, he’s probably armed. Possibly they would escort him to the authorities he’s hiding from. More likely they would simply yell that if he were a man he’d turn himself in and face the consequences.

But that’s real life. How are people acting out this “mob justice” on the Internet?  They’re signing petitions asking for his extradition, and/or to place African lions on the endangered species list so that at least assholes like Palmer won’t be able to bring home their “trophies” and might be subject to prosecution here at home. They’re speaking up and speaking out, and just maybe, possibly, some good will come of this tragedy. 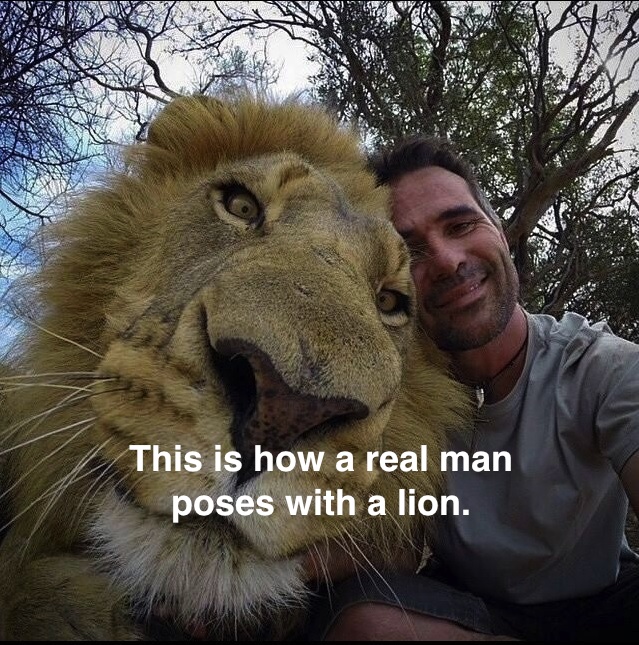