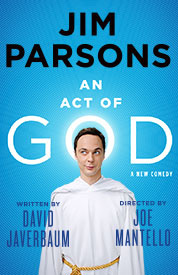 I don’t think I’ve ever watched an entire episode of The Big Bang Theory. I’ve tried. But I just found it offensive on SO many levels. The dumb blonde. The socially-awkward geniuses.The stereotype Jewish mother from a 100 years ago. Hint show: Real Jewish mother’s come in all shapes, sizes, and philosophies, and Ilana’s mother on Broad City is probably closer to the mark. However, Jim Parsons is an appealing performer, and I kind of regret NOT seeing him on Broadway when he was in Harvey although old-timey workhorse shows like that, no matter how well cast and directed, have no ability to surprise us once the movie version is ingrained in our head.

SOO when neither my sister nor I scored lottery tickets for On The Town (which wouldn’t have surprised us either, but would have done so musically) I went to TKTS and scored cheap seats (if you think $65 a pop is cheap) to Act of God. Act of God is not to be confused with the similarly titled Hand of God, which does not star Jim Parsons and is probably all together a nastier and more cynical show, not that there’s anything wrong with that. Because of the title similarities, the TKTS clerk actually checked with me before getting me the tickets: “Do you mean Act of God, with Jim Parsons?” That’s what I call competent customer service!

How was it? At only around 90 minutes or maybe less — short. It’s not a solo performance but is pretty close to it. As you probably already know, Jim Parsons plays God, and has a very good time doing so. The script is by a former Daily Show writer and that shows. It has the beats of television or stand up comedy. It’s funny and it’s generally fresh except for what has now become the absolute staple requirement of “inside” jokes including the requisite reference to those in the audience members in the cheaper seat as “the poor people.” Parsons delivered.  I can imagine the premise offending some people because some people will be offended by anything. (It might make a certain supreme court justice’s head explode.) The night we saw it (a few weeks ago. I’ve been neglectful) there seemed to be a heckler in the audience. I say seemed to be because there are audience questions though I suspect a lot or all of that is  staged. The heckler, however, seemed real. Parsons might have actually lost his train of thought for a second or two, but recovered quickly.

What the show is not is particularly deep or profound in its vision of the Almighty and His Plan for us, but it is entertaining.

So if you want PROFOUND see something else. If you want to be entertained see Act of God.

Ticket tips: It’s at Studio 54 which is small enough that there really aren’t any bad seats. There are usually tickets available at the half-price booths. Full-price tickets start at $55 for rear and side mezzanine. There’s also a rush ticket  mobile lottery with $37 tickets. Whatever kind of tickets you get, do it soon. It’s a limited run, ending in August.