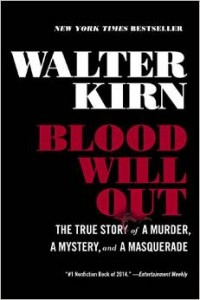 The main problem with Blood Will Out is Walter Kirn, who comes off as a guy you really wouldn’t want to be stuck in an elevator with. He’s never heard a name he didn’t want to drop. I couldn’t figure out by the end if he was actually a very canny writer, aware of his vanity, narcissism, and obliviousness and meant to portray himself as an unreliable narrator, or whether he really doesn’t get it and thinks his “friendship” with “Clark Rockefeller” and gullibility are great mysteries he hasn’t quite solved. The thing is at first “the relationship” angle is what drew me in. I was interested in the meet cute story of driving a disabled rescue dog across the country, partly as a favor, an partly to meet an eccentric scion of a wealthy well known family. In retrospect Kirn’s obliviousness to the animal’s suffering is an early clue to his own character — or lack thereof. By the time, I got to the part where “Clark” describes himself as resembling Niles from Fraser, and Kirn uses that to tell us more than we needed to know about his television watching habits, and yet again manages to mention his ivy-league college days, I was ready to throw down the book and wasn’t sure whether or not I’d be able to get through.
HOWEVER, I didn’t throw it down, and even though I’d read his New Yorker piece on the subject (which I suspect edited a lot of the extraneous nonsense out) and have seen several “true crime” television shows about the phony-Rockefeller, I kept reading. Kirn is a good, maybe even great storyteller when he doesn’t step all over himself. The writing, especially when he’s telling ONLY “Clark’s” story and not his own, is riveting. He could probably write circles around Ann Rule, and this did remind me a tiny bit of The Stranger Beside Me, Rule’s first book, in which she wrote about meeting Ted Bundy at the Seattle Crisis Clinic and then learning of his extracurricular activities. But if you are interested in true crime stories, Rule’s book is certainly less self-indulgent. Still, I read the entire thing in a matter of hours — even though I knew — more or less how it would end.

What I think might have helped would have been the right kind of editing. I get that Kirn’s placing himself in the story is sort of the point, but the writing is best here when he’s NOT writing about himself. Some details such as the identity of his mentally ill ex-mother-in-law aren’t very important while other personal items — like the fact that he and “Clark” both become divorced dads and struggle with this, might be more relevant, especially given that Clark’s downfall involved the kidnapping of his daughter. The book is a quick read at 253 pages, but would have been better if some of the unnecessary verbiage like who some ex-girlfriend went to prep school with had been cut. The problem with leaving this stuff in, is every time Kirn goes there, he takes us out of the story. That should have been obvious, if not to him, than certainly to an editor. There are references to Strangers on a Train, but this isn’t Strangers on a Train. The truth is that unlike Bruno and Guy, Clark just wasn’t that into Walter.

There are other problems as well. A time line might have been nice or dates somewhere. When he does mention one of Clark’s previous girlfriends and drops a year, I had to think back about whether that was before or after he met Clark. There’s also the problem with the interviews he didn’t get. It’s likely that Clark’s ex-wife simply turned down the chance to talk to him, but I would have loved to known more about her story and how she’d got taken in for years. Kirn does have a journalistic background, so it seems lazy that he didn’t try to talk to more of the other people who’d been duped through the years. There’s an imbalance. When he finally writes about his ex-friend’s victims — the ones he murdered — it almost seems like an afterthought.

So here’s my take, look at the sample and the prose. If you are really intrigued and think you can learn to skip the parts that readers don’t read, than maybe it’s worth it. If you always wanted to spend your time around someone who is not famous but can tell you about all the famous people he knows, then this book is for you. If you have a few hours to kill on a plane and you already know a little about the case, you might enjoy it. Again, my own experience was that if I’d read up to the “Niles” part in the bookstore (which occurs AFTER the sample ends) I probably would have thrown it down and bought something else, but having bought it, I kept going and I don’t consider it a waste of time.

(Did you actually find this useful? If the answer is YES, then please help support this blog by clicking anything on “My Picks” above (including Blood Will Out). If you then buy anything within the next 24 hours Amazon will throw pennies at me. Beautiful shiny pennies! Also have a look around at some of the scintillating content while you’re here.)