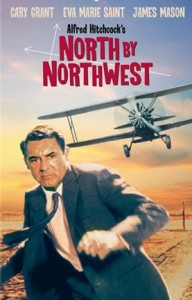 As we near our end (Can you say antepenultimate?) episodes are becoming increasingly self-referencing and movie/style references are getting louder. My recap of this week’s episode is finally up at Happy Nice Time People. It was delayed due to travel and indirectly because apparently a lot of hotel cable packages don’t include AMC. Who knew?

Don is on the move west. Where will he stop? My money is on San Francisco. Why there as opposed to LA? Mostly because San Francisco, per Oscar Wilde, is where people who disappear are said to show up and that would be perfect for Don or Dick or Bill or whatever identity he takes next.  I’m hoping he falls out of no window, no terrace or bridge. For god’s sake, he’s an ad man, not a broken bad meth manufacturer or a mafia kingpin. But perhaps I’ll give you more ending speculation another time.

Meantime, catch my full recap when it’s up. Really, am I the ONLY recapper to notice the very specific North by Northwest references in the last episode? I’m talking about da plane da plane, and the cornfield he’s driving through at the end, and of course the fact that from Racine Wisconsin to St Paul, Minnesota the direction is uh north by northwest.