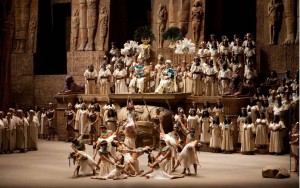 So we idiots went to see Aida, Monday night at the Met. It’s not a revival that’s getting a lot of reviews because the Met revived it earlier in the season then that ended, and then they recently brought it out for a few more performances with a new cast and conductor. The one review of the new cast that I did see, which was written by someone who knows a hell of a lot more about music than I do was meh and not gentle on many of the singers or on the conductor, but we idiots loved it and there must have been a lot of idiots like us in the house that night because there sure was a lot of applause.

Without going into too much detail because I’m trying to get this up by the 12:00 rush tickets deadline, here are some highlights:

This is the Sonja Frisell production, which while not as elaborate as a Zeffirelli production (and seeing the Zeffirelli version is definitely on our bucket lists) is still pretty awesome. Given the “ancient Egyptian” setting, the costumes, murals, etc, one can’t help but mentally reference Edward Said, but that’s part of the fun and so goofily mythical that it’s not offensive (unlike say writing an Arab sheik into a revival of Rigoletto and setting the whole thing in Vegas.)

Placido Domingo conducts and yes indeed the audience LOVES Placido, and this listener thought he did an excellent job of bringing out the emotion of the music. While the singers are all fine, I thought mezzo-soprano, Violeta Urmana was especially good, and strangely sympathetic as Aida’s rival, Amneris. Soprano, Oksana Dyka sang Aida. There’s a steely quality to her voice that some listeners might like and others might dislike. She doesn’t sound like anyone else. We thought she was effective here and in her Met debut last year in Prince Igor. The Met chorus, as usual was fabulous.

The story for those unfamiliar: Ethiopian slave/hostage loves Radames an Egyptian military leader. Amneris, the king’s daughter loves him too. He loves Aida but it’s a secret. After he wins the battle against Ethiopia, the king rewards him with an engagement to Amneris. Aida’s father who is actually the king of Ethiopia, has been taken prisoner. He and Aida escape with Radames’ help although he doesn’t know that her father is the king. He is tried and locked in a tomb. Aida has hidden herself in the tomb, so they can die together.

As is true with a lot of famous operas, you’ve heard a lot of the music, even if you never knew where it was from. While the four hour opera (including intermission) never lagged, Act III was especially exciting, not only for the music which involves a very famous processional that is highly emotive, but for all the pageantry on the stage. (I imagine the labor unions who last year complained of excess in the productions having conniptions over this one.) In addition to elaborate and vertically movable sets, there’s an onstage band, a cast of at least hundreds, and horses! As silly as the story may seem, it’s in Act III that the music really hits you in the feels. When Aida is reunited with her father – now a lowly prisoner begging for the lives of his people, and Radames the victorious general is “rewarded” by the promise of marriage to the Princess he doesn’t love, it’s overwhelming, and yes I did find myself crying from both the sadness and tragedy and because the music – like a lot of Verdi’s music – just does that to you.

There are only three performances left and not lot of great seats – except the really expensive ones – available. We sprung for second row balcony, which was a good choice as there’s a lot to see on the stage – including a ballet sequence, and given the height of the set, the back of the orchestra and orchestra standing room where the top may be slightly cut off might not be the best place to sit. However, if the best you can do is rear orchestra rush or standing room, it will still be worth going. If you are a novice at the ticket thing, you might want to read this. Good luck getting seats!

(Hey folks, if you found this useful and want to thank me, no better way than to at least check out — and maybe purchase — a book.)