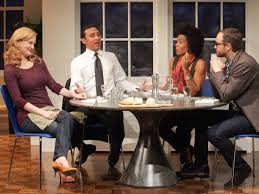 We caught Disgraced last night on Broadway. The play originated in London and was written by British novelist, Ayad Akhtar.  I’ll venture an unsubstantiated guess that a few of the lines and references were changed to New Yorkisize it.

The plot centers on Amir (Hari Dhillon who originated the role in London, and like many British actors can do a dead-on American accent). Amir is an American-born corporate attorney of Pakistani-descent. When we first meet him, he appears to have it all – $600 shirts, an apartment with a terrace that many New Yorker’s would kill for, nice things,, and a beautiful artist wife, – Emily, played by the amazing Gretchen Mol (who can probably do anything). Amir and Emily invite another couple to dinner – Issac (Josh Radnor, known to television viewers for nine seasons of How I Met Your Mother) and Jory (Karen Pittman, a less known but a very charismatic performer). Issac is a museum curator who finds Emily’sIslamic influenced work interesting. He’s Jewish. His wife Jory, happens to be a coworker of Amir’s, another rising associate. She’s African-American. Amir also has a nephew played by Danny Ashok (another stealth Brit) , one of those ernest youths full of passionate intensity.

We expected to see a comedy of manners and cultural expectations where things might get heated and the conversation could go too far – something like Clybourne Park or Chinglish, two plays we love. We got a bit more than we bargained for. The stakes are higher in Disgraced. While there are some funny lines, this is might be classified as a tragedy of manners.

I saw it with three other people. We all felt the emotional punch. The performers, especially Ms Mol deserve extra combat pay for their work here. It’s a short play, but one you’re likely going to need to debrief from. Yet, in the light of day, I can’t help thinking it somehow less than perfect. While the actors, did a fine job of making me believe I was watching actual human beings, I can’t help feeling they were all being used by the playwright to prove a point.

If you want to catch it for yourself, it’s at the Lyceum theater on West 45th. It’s a relatively small house, with mostly good site lines everywhere. However, some of the extreme side seats in the orchestra partial view. (I know this from a previous production at the house.) Those tend to be among the seats for sale at the TKTS booth, so if that’s where you are shopping, I’d avoid those seats. If you’re looking for a bargain, you might do better to buy a balcony seat directly from the box office for $37.50. We got our balcony center seats online with fees for $46.50 each – still relatively cheap by Broadway standards. It’s a small enough house that while the balcony is far up, it’s not far away. There are also “rush” student tickets available. This is NOT the type of production that tourists are lining up for, so the odds of your getting tickets are about 100%. It’s a limited run, closing March 1st.

(If you found this or anything else on this website useful or entertaining, you could thank me by clicking on any one of the books above in My Picks, OR checking out my latest novel.)