(Thanks to Marion Stein for allowing me the rare honor of a guest post on her blog.)

I stalk the web sometimes looking for posts about Marie Duplessis in a desperate attempt to find my book’s “target audience.” Stalking is never a good thing, but at least I’m not going after my critics. 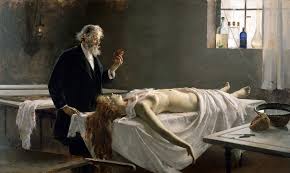 My search hasn’t resulted in many new readers, but it has exposed me to some interesting blogs. One is Symbol Reader. Aside from the Jungian analysis of La Traviata, I was intrigued by a “non-Marie-related” post about a painting, The Anatomy of a Heart, by Enrique Simonet Lombardo. I don’t believe that I’ve ever seen Simonet’s work 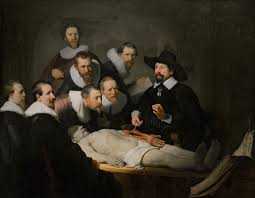 before or even heard of him. The painting dates to 1890. I’m no art expert and can’t put it in context. Certainly, it’s realistic, but medically realistic artworks go back aways, and an obvious predecessor is Rembrandt’s famous painting, The Anotomy Lesson. But while Rembrandt’s is purely clinical, Simonet’s work is far more emotional. The scientist holds in his hands and contemplates a young woman’s heart. What mystery lies therein?

It’s not necessary to discuss the symbolism of the heart. That’s all around us in our poetry, our songs, our images, our very language — and by that I’m not referring exclusively to English. The heart and the soul have long been connected, even interchangeable. But what is a heart once it stops beating? 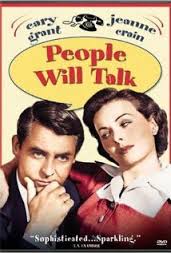 The painting startled me for a particular reason. It reminds me very much of a similar visual from one of my favorite classic Hollywood movies, the very quirky, People Will Talk. Anyone who’s seen the film will understand why my brain made the connection. Anyone who hasn’t seen it, should. (You can steam it here.) It would be a good use of your time.

The film was directed and written for the screen by Joseph L Mankiewicz, better known for being the co-writer of Citizen Kane and the director of All About Eve. It was from a play by Curt Goetz.

The movie is wonderful example of how to circumvent the censorship that Hollywood films were subject to. I have no wish to spoil it for anyone who hasn’t seen it, but I do want to write about that image.

Cary Grant plays Dr. Noah Praetorious, a very unusual physician, whose nonconformist ways – he believes in talking to his patients – get him in trouble in the McCarthyite 1950s. In the opening scene, Praetorious gives an anatomy lesson. The body is that of a beautiful young woman. 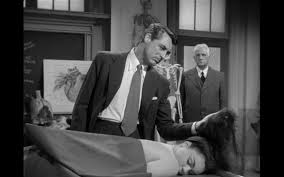 Unlike Simonet’s painting, he does not display her heart, but he does fondle her hair tenderly, as he reminds his students that she was once a living being with hopes and dreams that they will never know. How did she die? That’s not addressed, but clearly she didn’t die of a wasting disease. What then? What could have caused the sudden death of the young beauty, leaving her corpse so resplendent? Praetorious doesn’t tell his students the cause. The movie never once uses the word abortion, but there it is, the body on the table. It’s a subtle implication. There is no reference to an act the censors would have deemed unmentionable, but based on subsequent events in the plot, it is certainly a possibility that she died as a result of a back alley abortion, which in those days was not an uncommon occurrence.

So my mind immediately went there when I saw Simonet’s painting, Thus it is, and thus it always has been.

Of course, the victims of such operations did not always leave such beautiful bodies behind. Before Roe v Wade, the Supreme Court ruling in 1973, New York became one of the first states to repeal its own draconian anti-abortion statute (dating from 1830) and allow women the right to choose to terminate their pregnancies. One of the articles of evidence that persuaded the legislators was a photo of a dead woman — crouching and bloody. She had been left to bleed out and die after an illegal abortion. Posting that image here seems like a desecration, but you can find it if you must. I recall reading once that her brother came forth years later to claim the image, to give the victim a name.

It’s something to think about and remember when anti-abortion activists trot out pictures of embryos and fetuses. Prior to Roe v Wade, women died every year as a result of illegal abortions. Thousands of them. Some of them just starting their lives. Others leaving behind young children. It’s probably difficult for most people to get their minds around that given that two generations have come of age in a post-Roe world.

No amount of legislation will prevent all abortions, although most could be prevented by simply educating more women about their bodies, talking more openly about contraception and providing access to it – including to emergency contraception, educating people – woman and men about the mechanics of pregnancy and how to prevent an unplanned pregnancy other than by “abstinence,” providing more access to prenatal care and other services that might encourage some women to continue their pregnancies, etc. etc. Perhaps working for a national minimum wage and greater income equality might be a start in cutting down the economic desperation that causes some women to terminate viable pregnancies.

Imagine it anti-choice people! Without outlawing abortion, the procedure could become so rare you might be able to spend your time worrying about something else. Wouldn’t that be something to work towards! But instead, the agenda pushed by the self-called “pro-life” advocates is one that not only seeks to end abortion, but to cut off women’s access to contraception, that judges some forms of contraception as equal to infanticide, that leaves women without a choice other than “keeping their legs together” even when rape is involved.

And the end result will be as it always has been, a woman on a table, the subject of an anatomy lesson.

(I don’t usually write such serious posts. I have written a super-smutty vampire novel that some people seem to like. You could click here to find out more.)