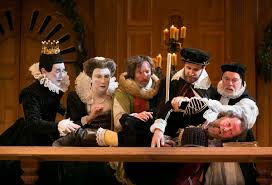 We saw Twelfth Night at the Bellasco Theater last night.

This is a production of the Globe Theatre which does its best to perform Shakespeare as it was intended to be performed. Costumes are period, as is musical accompaniment. As it’s performed on a Broadway stage rather than an open-roofed circle, some accommodations need to be made. The stage is bare except for a few props brought in and out. There’s an elaborate candelabra above the actors. This did give the better-half and I pause, fire safety and all, but I’m sure some precautions were taken. The audience is told to arrive twenty-minutes early to watch the actors get into make-up and costume on stage while traditional music is played (on top of the stage) by musicians playing period instruments in costume. Also, all the women’s roles are played by men.

So does this work including the casting? Yes. It was a lot of fun. One problem, however, is getting in twenty-minutes early. Ticket holders line up and it’s a pretty long, slow line, so by the time anyone at the end of the line gets in, they may only be watching the actors for five minutes. I don’t know when the line starts forming, but if you want to experience that whole thing, you might want to get there very early.

The acting was superb. The better-half thought some of the stage business was a little too camped up, but I’m not sure that was historically inaccurate. It is a comedy, and Shakespeare practically invented the double-entendre. The play which likes most Shakespeare plays contains lines that we know is a comedy and like a lot of Shakespearean comedy involves mistaken identity and women disguising themselves as men. When a man is playing a woman disguising herself as a man, that’s a nice extra layer. The women playing men played them straight (no pun intended). 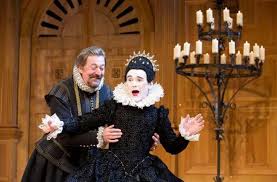 Because the actors know what they are saying, you will too. It’s hard to pick stand-outs, but the cast features Stephen Fry – yes that Stephen Fry, and Mark Rylance as Olivia is a sight to behold, but the whole play would fall apart without a strong Viola, and Samuel Barnett was excellent.

This is a short-run, closing in mid-February. I understand that tickets are sometimes available at TCKTS, but you can also get them through the show’s website. All balcony seats are $27, and there are other $27 dollar seats as well scattered in other sections, but good ones are hard to find. It should be noted that the $27 tickets actually cost $37 with fees if you buy online. I’m not sure whether you can avoid the fees by going directly to the box office. It’s not a big theatre, but some balcony seats may only have a partial view with the front of the stage cut off. There is also some onstage seating including cheap seats there, but it looks like those may all be sold out for the run. If you want to splurge, you might want to go with the onstage seating rather than the orchestra, that is if you don’t mind a little interaction with the actors and being visible to the rest of the audience.

(First time visiting? There’s plenty to see here, or you can hop over to check out some fiction Marion’s written.).