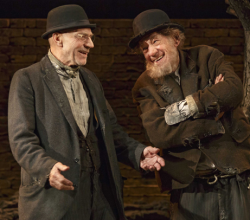 I don’t know if this review is strictly kosher. The better-half and I caught a pair of rush tickets and saw a preview of Waiting for Godot on Thursday, November 21st. The play’s official opening was November 24th. I wasn’t planning on blogging about it, but after reading Ben Brantley’s glowing review in Monday’s New York Times, the curmudgeon in me felt obliged to say something.

First, this production, featuring one of my favorite starship captains, and Gandalf, was not terrible. It wasn’t one of those ridiculous star-studded mediocrities that wins awards and are critical darlings even though they are shit. (And yes, Vonya and Sonya and Masha and Spike, I’m talking about all four of you.)

Ian McKellan was an excellent Estragon. His performance was funny, but humane. He made the character his own. It was honest and true. Patrick Stewart could have been having an off-night, but I don’t think so. This is a revival of a London production he and McKellan starred in in 2009. His timing was excellent, and clearly McKellan and Stewart were having a fine time, and one did see them almost as a long married couple, having the same conversation again and again and again, but I got much less sense of who his Vladimir was, and no I don’t think that was because his character is more in his own head than McKellan’s.  It was surface. I didn’t get depth. The comedy was great, but comedy is for those who think and I want a little tragedy thrown into the mix. I go to the theater to feel. Ultimately, Stewart didn’t make me feel much. (And I know he’s capable of making me feel, because the end of that Next Generation episode with the probe, and he’s playing the space flute,always reduces me to tears.)

As for Billy Crudup’s Lucky, it seemed like a stock performance – the classic version of Lucky down to the squeaky voice and the long gray hair. Lucky’s infamous monologue should shock and awe an audience, even if they’ve seen the play before. It didn’t the night we saw it. Was everyone off? Saving their energy for opening night? That doesn’t seem very professional, and I don’t buy it.

I don’t even hold Shuler Hensley responsible for his Pozzo.  His performance seemed so misguided, I can only blame the director. Pozzo, a slave owner, was played with an American southern accent. With his girth, red-hair and clownish make-up, he seemed to be doing Foghorn Leghorn, and sorry, but that’s just reductive, and felt like an English production’s dig on Americans.

At least Hensley offered something a little different than what one might have expected. Otherwise, there was nothing new about this Godot. The play is considered one of the most important and influential  of the 20th century. That may be the problem. It’s a known entity. Much of the audience will come in with some degree of familiarity. Even those who’ve never seen it, have seen it’s influence played out on everything from The Twilight Zone, to popular movies and situation comedy episodes.

So in any production there has to be a reason beyond the opportunity to put a few well-known actors together on stage. While the play’s “meaning” may be open to many different interpretations, the director needs to bring a vision. Otherwise, you’ve just got a relic. Possibly a well-played relic, but a relic nonetheless. ‘ Theater should be about risk, and this was an extremely safe production. 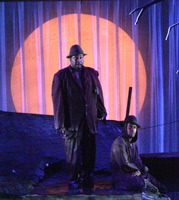 I’ll disclose that this irks me so because of a Godot we saw back in 2006, at the Classical Theater of Harlem – back when they had a theater. (We are praying that this now homeless company will find a permanent home and not go the way of the City Opera). That was the all-black, Katrina Godot, and it wasn’t a gimmick. It was an effing revelation. The actors were people we had never heard of nor seen since, with mostly live theater credits and maybe a few appearances on various iterations of Law and Order. The tree was there, but it was sticking up out of about three feet of water. Pozzo and lucky arrived by raft if I recall correctly, and most of the action was set on rooftops of inundated houses. If you were sitting in the front rows, there was a good chance you’d get wet. And you couldn’t help feeling for all the artificiality and artifice that what was going on onstage was vital, true, relatable, and important.

And if you’re not going to get that in a night of live theater, why leave the comfort of your home?

For those not dissuaded, rush tickets in the front two rows including the side and boxes can be had for $30 at the box office. You’ll need to get there at least an hour, probably two, before the ticket booth opens at 10:00 am. I don’t know if TKTS has tickets, although they usually do for non-musical plays, but probably at a higher price. Despite our experience, we are still planning to see No Man’s Land, which is playing in repertoire with the same actors.

(Hey, if you found this review either useful or irritating, you might want to check out some of Marion’s own work, here.)