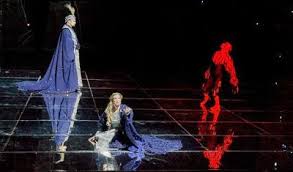 Neither of us had heard of Strauss’ fairytale opera, Die Frau Ohne Schatten before, but Opera Teen called it “the most hotly anticipated event of the season” so we figured, can’t go wrong with that.

Christine Goerke, as the Dyer’s Wife, is a particular standout in a very strong cast of singers, and as Barak, her husband, Johan Reuter brought great humanity and presence. The sets and lighting have received a lot of press. The lighting was amazing. The red feather costume of the falcon glowed like embers. And the emperor’s transformation from stone back to flesh was nothing short of a miracle. However, the set with its large panels which at times were mirrored and at times black, reminded me of Tron. It was showy, but didn’t always draw us into the story. The transformation from the half-spirit world of the Emperor and Empress to the drab home of Barak the Dyer was accomplished via elevating the spirit-world set to reveal the Dyer’s home. The Empress and her nurse descended a spiral staircase down to the Dyer’s. I had some trouble with this, partly because I’d seen that staircase employed in various ways in different productions, and in this case I had to do too much mental work around the “invisible” stairs in the middle of the house. The story of the half-spirit Empress trying to obtain a shadow doesn’t have the heft of myth or the charm of fairytale. Fairytales are for children, but this one seems geared for adults. The darkness of the messenger would probably frighten small children, and the message is not just the shadow as a metaphor for the human soul, but that the ability to reproduce is the true purpose of humanity. It’s all a bit heavy-handed, and silly even for opera.

Musically, the score is brilliant and the orchestra and conductor were up to it. But we didn’t find ourselves emotionally connected. At times the music became epic and melodramatic while there was no singing and little stage action. Some of this may just be characteristic of German opera or maybe of Strauss. We’re idiots; this was our first Strauss and our first opera with a German libretto. So what do we know?

If you want young children to experience enchantment with a classical score, you’d do better to take them to The Nutcracker or maybe Tales of Hoffman. If you’re on the fence about opera, this isn’t the one to start with – you won’t leave humming. However, if you are familiar with the music, and thrilled that it’s being performed, overall it’s a fine production with some great performances, and you won’t be disappointed.

As of this writing, only one performance left — Tuesday, November 26th. Still some decent seats left, including full view family circle, and of course rush tickets is always an option. For more on last minute and cheap tix, you can check out this post.

(Find this helpful? Marion is too proud to accept donations, but you could check out her fiction, including this little novella which has a bit of a fantasy element as well.)