It started, as things often do, with the bathroom. Ours was and still is circa 1957. We had the bright yellow tiles that were the legacy of every apartment in our complex. After years of thinking, “Someday I will renovate,” I realized that day was unlikely to ever come. But I decided I had to do something, so I put up some textured paintable “tin ceiling tile” wallpaper, with textured paintable “stucco” wallpaper on the ceiling, and I used colors that would make the yellow look intentional.

But what about the floor? It had gray, small, plain, concrete tiles. Neutral, but dull. They weren’t going anyplace, so whatever I was going to do would have to go above them, and I wanted something even a novice DIYer could handle. I didn’t think that vinyl planks, even colorful ones, would be an improvement. So I went for more wallpaper.

I decided on a floral pattern with colors close the ones I’d used. I did not prep the floor in any way beyond a thorough cleaning. I used the “professional” standard wallpaper paste and Vermont Natural water-based polyurethane – a green product manufactured from whey.

How’s it holding up?  After about a year and half, pretty well. I didn’t prep the surface at all, but pressed the paper down against the tile and into the grout. The seams show, but not too badly. I’ve had to re-glue some corners, but basically it works. 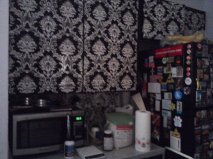 The next experiment was the kitchen — another example of authentic mid-century style. After playing with wallpaper on the cabinets and as a backdrop, I went for a white with black swirl wall paper pattern on the floor. (Floor not shown in picture.) After a few months, the floor began to look ragged around the edges. What went wrong? Both the bathroom and kitchen paper were made of vinyl although the kitchen seemed to be a lighter grade. There was certainly more foot traffic in the kitchen, but the main issue was our dog. 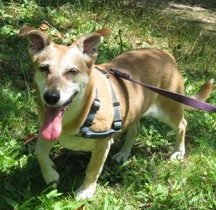 She was in her golden years and her nails grew quickly because she wasn’t dulling them by walking much, and regular clipping was way too stressful for her and us. That explained the scratches, but not the seams which were separating and coming up. It might have been the glue. While it was the same stuff that I used in the bathroom, it was against a different kind of surface. There were vinyl glue-on tiles below the paper. I’d use primer to help prepare, but I probably should have used special vinyl to vinyl wallpaper paste. Beyond that, I have another theory. I think I might have been better off with paper wallpaper rather than vinyl. It sounds counterintuitive, but the paper absorbs the polyurethane and becomes stronger – actually changing chemically, whereas with the vinyl, the polyurethane merely rests on top. Because of the dog, I put off doing anything until she’d crossed the rainbow bridge. Then I put it off, just because.

Somewhere in my research, I discovered paper-mache. I read about “paper bag floors.” I won’t go through the whole process but google images for “paper bag floors” and you’ll see various examples. Briefly, you tear up many pieces of paper. You scrunch them up. You dip them in a glue-water mix, and you paste them on the floor. Very few people use actual paper bags. Most use Kraft brand paper or something like it. I decided it might be the perfect solution for our enclosed terrace which had a rough concrete surface painted gray by the previous cooperators. 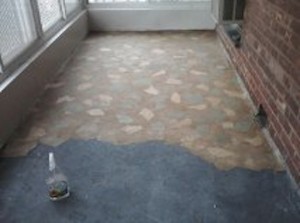 We had a rug out there, but as it’s our cats favorite hang out and houses the litter pans and cat tree, the rug was hard to clean. The problem with the paper bag solution was that I wanted something lighter in color than what I was seeing on the web. Then I realized the packing paper in my Petco deliveries was a nice gold-brown shade. But I didn’t have enough of it. So I went shopping. At Home Depot, I found inexpensive $3.00 a roll, “masking” paper over by the paint supplies. This came in brown, green and a reddish color. I took a roll of brown and a roll of green. Using the brown as a base, I put random shapes of the gold-yellow and green on top. This was one of those rare cases where the finished projects almost exactly matched my vision of it.

While I’d recommend you go here for basic instruction, these are tips based on my experience: 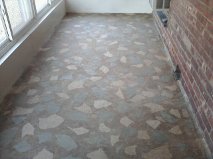 Dip each piece in the mixture as you go.This is easier and probably more fun than using a paint brush. Just dip for a second so the pieces don’t fall apart, but long enough to get it saturated. 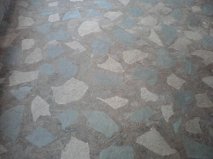 I was so happy with the terrace that I decided to finally tackle the kitchen floor — this time with paper-mache instead of wallpaper. I was now besotted with the idea that you could really get creative with paper. You could use wallpaper pieces, book pages, anything. Color was not limited – or so I thought. Why not continue the black and white concept by using white butcher paper as a back drop with black Kraft paper as “tiles” or in some other pattern? I finally settled on black 8 x8 inch diamond squares. The floor would mostly be white, just a row of diamonds down the main galley and surrounding the small dining area.

Paint dry, I had my diamond squares ready – forty, double-sided for strength ready. Also on hand were two bags of white paper – one with a smooth edge for sides and one all rough edge. I started pasting the white and had done a couple of feet when I decided it was time to lay down the first black tile. It bled! Uh-oh. I hadn’t planned for this. The green and gold paper on the terrace hadn’t bled. I wasn’t sure what to do. I didn’t want a plain white floor. I could have used the leftover gold and green pieces from the terrace, but the whole point of the kitchen was black and white.

Then when I lifted the messy black diamond, I made a discovery. It had left a really interesting pattern against the white. Kind of marbly with distinct edging on the paper. I’d read about crafty people who marble paper, so I was familiar with the process. I decided to go for it, in my own primitive way, and just kept dripping black onto the white, and pressing wet black paper around. I figured the polyurethane would keep everything from running once it dried out.

It felt like cooking when you wind up substituting an ingredient or something goes “wrong,” and it comes out completely different than what you’d planned, but still tastes delicious.

So while there are limits to paper-mache, there’s a lot you can do around them. The takeaway — if you are planning to use colors,  check for running first. Clean up is easy. I found this link useful — the skinny is always clean polyurethane floors with the same stuff you’d use for glass table tops. A damp mop with vinegar and water works best.

In addition to being easy and forgiving, I love that paper floors are different enough that people can’t quite figure them out. The terrace looks almost like slate. As for the kitchen, there are no tile seams. You can see the edge of different pieces, but the pattern is random. I don’t think anyone is going to mistake it for real marble, but it has more of a stone look and dimensionality than vinyl. It probably most resembles “real”  sheet linoleum,  but mostly it just looks good (in the opinion of me). 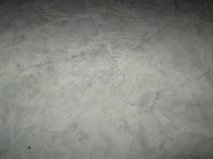 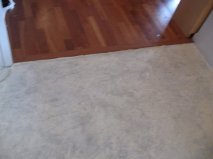 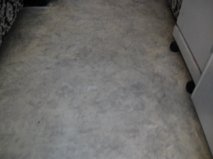 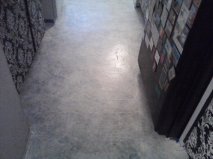 2 thoughts on “Floors I Have Made”