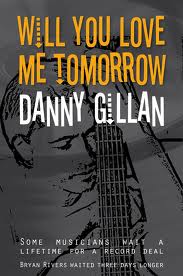 (This was originally posted in October of 2013. In honor of the upcoming vote on Scottish independence, I am repeating my review of this novel, and will keep this on the front page for at least a couple of days.)

Danny Gillan is one of those indie writers I’d heard good things about. Where does one hear good things about indie writers the uninitiated may ask? In this case, the Amazon and Amazon UK forums where every once in a while readers-who-aren’t-writers will mention good reads or promising authors. Gillan also participates in some threads (as do I) and always comes off as intelligent and not an asshole. So when I discovered  a free Kindle promo for Gillan’s 2011 novel, Will You Love Me Tomorrow, I went for it.

(For the 99.9% of Amazon users who were unaware of the existence of the forums, you can find them by clicking the word “Discussions” from any book’s Amazon webpage.)

Will You Love Me Tomorrow is the story of what happens when an obscure, forty-something (or very close to it), Glasgow rocker is “discovered” by a London record producer, three days after his suicide.

It’s a great example of taking a situational premise and running with it. There’s a perfect tag line on the cover – “Some musicians wait a lifetime for a record deal. Bryan Rivers waited three days longer.”

The story opens with Bryan’s suicide. As we don’t know Bryan yet, it’s not heartbreaking or too maudlin for the reader to bear. What it is, is perfectly clinically accurate, and I say that as someone with an MSW who spent years working with people in crisis. This was a really well done rendering of how someone who has been clinically depressed for years and just wants it all to be over would think and act.

Opening with a character who will be dead by the end of the chapter is a bold gambit. I wondered as I read on whether or not we would get Bryan from beyond the grave looking in on any of the action that follows. Thankfully, we don’t.

What we get instead are those he left behind, including his widow, Claire, his dog Toby, the best friend who’d sort of given up on him and now feels very bad about it – Adam, and assorted members of Bryan’s family. Those are the Glasgow characters. We also get London, mostly in the form of the rock and roll journalist turned record producer, Jason, who happens to hear the demo Bryan sent in shortly before his death. Jason falls in love with it without knowing that the writer was a tortured soul, recently departed.

The narration is close third person from different characters’ viewpoints – mostly Claire’s, Adam’s and Jason’s. Gillan writes women well. Claire is fully realized. Gillan’s technique of shifting point of view allows us to see Claire as she sees herself and also as others see her. She’s strong and beautiful and smart, but it’s a hard-won strength, and it can push others away.

Being a New Yorker, I appreciated the Glasgow setting. I’ve never been there, but feel I know something now about what it’s like that I wouldn’t have gotten from any one-day tour.

I wouldn’t classify this as either chic-lit or lad-lit, but there is an undercurrent of romance, a feeling early on that Claire will wind up falling into bed with either Jason or Adam. That’s not to say it’s predictable. There’s very little certainty about which one will win the prize or if anyone will really win in the end.

It’s easy to imagine this book as a movie or even a play, an intelligent full-bodied drama (with a little bit of comedy) about mostly likable characters. Gillan is not a sentimentalist, and deals realistically with Bryan. Tortured geniuses do not make the best husbands, friends or brothers. Suicide adds a great burden of guilt for the survivors – add to the mix that the deceased has suddenly become posthumously famous with adoring fans romanticizing his pain. Characters need to come to terms with their feelings, and Gillan gets us there.

This may not be a great work of literature, but it’s fine intelligent story for grown-ups. After spending a couple of months (at least) trying to slog through A Naked Singularity, it was a great relief for me to pick up a book I could devour greedily in less than a week.

The only thing I wasn’t crazy about it, I can’t tell you as it would be a spoiler. I will say that there is a climatic moment for one of the minor but important characters which involves a very sad thing happening. I won’t call it contrived, but I wish the writer had come up with another way.

You can’t get it “free” at the moment, but it’s regularly only 99 cents, and that’s quite a bargain.

(You know who else has written a thing or two? Check out a novel that’s mentioned on a wikipedia page.)

2 thoughts on “Thursday Book Review — Will You Love Me Tomorrow? Danny Gillan”