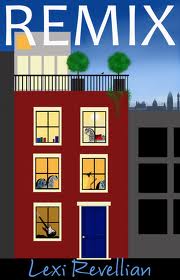 I’m not normally a big fan of the “accidental detective” school of mystery, but Lexi Revellian makes Remix work. The initially implausible situation — a young woman meets a man and his dog whom she finds camped out on her rooftop terrace and invites them in for breakfast — is somehow made quite believable. The author accomplishes this magical feat by giving us a narrator/protagonist who is real, likable, interesting and layered. The pacing works and the writing never gets in its own way. While there’s certainly a chick-lit quality to this — Caz is single, young, attractive and has more than one character interested in pursuing a romance with her, this lacks the whiney quality of a lot of that genre and should appeal to anyone (male or female) who likes a good mystery. If Caz continues to find herself involved with investigations, I’ll be happy to follow her adventures.

This is a great book to read on a rainy day, plane trip, during your lunch break, etc. It’s a short, quick, easy page turner.

BTW, this is another of those “indie” books available for 99 cents on Kindle. (There’s a paperback as well.) It came out in 2010 and became a bestseller at the Kindle Store in the UK. It didn’t do as well in the US. Some US reviewers complained about the Britishisms. I like that kind of thing, and had no trouble figuring out the meaning of the occasional regionalism based on context. It’s not exactly another language!

Revellian has since published a few other books. Replica the second, was quite a bit darker and a genuine “thriller” with a sci-fi element. It too featured a strong young female protagonist.

The author has developed a loyal following. I haven’t read any of the others. Some are firmly on the fantasy shelf, and I don’t generally read that genre. If you do, you might want to check them out. They’re all easy on the wallet.

(Marion also has some books of her own you might enjoy, but being a shy type, she won’t mention them here.)