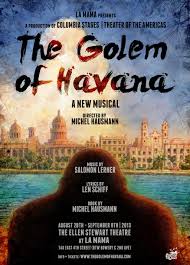 They had me at the title, The Golem of Havana. They had my better-half as well. His father’s family briefly sojourned to Cuba on their way to America.

Tickets were cheap, and it was at La Mama in the East Village, a theater I probably hadn’t set foot in in twenty years or so though I once wrote a book set in the neighborhood.

As the band began to play, the BH realized with a little trepidation that it was a musical. He doesn’t like musicals — with a few exceptions. Fortunately, this turned out to be exceptional – one of those musicals where the music and story are integrated, where there is a serious theme and the music adds to the emotional impact. At intermission he paid the show the ultimate compliment. “It’s like opera,” he said.

The mostly equity-cast all acquitted themselves so well it’s hard to find standouts, though I especially enjoyed Felipe Gorostiza as Batista. He managed to make the dictator comically sleazy while also suggesting his dangerousness and superficial charm. Liba Vaynberg in the leading role was powerful, and if the world is just, she won’t need a day job for long.

The story is the tale of a tailor’s family – Hungarian Jewish immigrants, Holocaust survivors – struggling in Havana on the brink of revolution. The golem at first exists as a comic book character created by Rebeca, the Cuban born daughter of Pinchas and Yutka, but later emerges as a symbol of the revolution itself – a mythical monster created to destroy evil, who may prove to be beyond the control of its creators.

The music is a lively klezmer inflused salsa mix. The lyrics witty. The band was small but did a great job, including a bit of business where the volume of the radio is lowered and raised a few times.

The sets are simple but work well. Overblown Broadway productions could learn a thing or two about doing more with less.

The only criticism I have is the short run. The show was to close on Sunday night. Performances had sold out despite little publicity. Two shows were added – one tonight (Monday, Sept 9th) and one tomorrow night. Although we are warned that golems should be put to sleep after use, we can only hope this one returns soon, maybe even to a larger venue. Meantime, tickets can be purchased here. If you can go, then go. It would be a shonda to miss out.

2 thoughts on “At the Theater — The Golem of Havana”