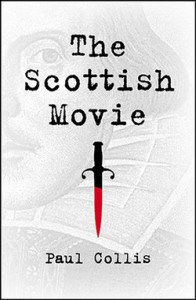 There are a gazillion “books” uploaded to Amazon by their authors every year. Ok, I just made the number up because I couldn’t find it on the interwebs, but when anyone can upload anything it’s probably at least a million. I don’t know how much of that is fiction, but let’s say there are 500,000 novels uploaded, and 2% of them are readable, not bad, or even better than not bad. On the one hand that’s still a lot of books – 10,000. More than even the most avid reader could get through in a year, unless she was running some kind of book review scam. On the other hand, readers would have to find those good ones amongst a lot of dreck. You could begin to filter by breaking it down into genres you like, but the proportion probably remains at 2%. So when you do come across one of the good ones, it’s worth giving a shout-out.

Paul Collis’s The Scottish Movie, is a nicely polished gem. It opens with a novel-within-the-novel — the story of a young aspiring actor in Elizabethan England, Henry, whose idea for a play about a murderous usurper gets pilfered by Shakespeare. Henry though powerless wants his revenge and develops a plan to get it. He and his friends will become involved in the production of the play, now called Macbeth, and do their best or worst to see that the show doesn’t go on.

I will confess that this was my favorite chapter. The well researched historical novel that begins the book was superb. (If Collis decided to write the rest of The Scottish Play the novel-within, I’d be happy to read it.) Next we jump to the present and get life-imitating-art when young aspiring actor Harry’s novel is stolen by a slimy producer (no Shakespeare he) in present-day Hollywood. Life imitates art when he overhears young Harry discuss the work with friends, mentioning that it’s uploaded to a “safe” website where it can be read by registered producer-types. Instead of optioning the novel, our villain decides that if he changes things just a wee bit, he’d be on safe legal ground and free to steal.

The concept could get tricky, especially in how closely life might imitate art, but Collis pulls it off which takes considerable skill.

While the premise goes back to the superstitions that have grown around Macbeth, you don’t have to have prior knowledge of the Scottish play or the legends surrounding it. Collis manages to tell the story in a way that makes it enjoyable to those already familiar with some of the history, and accessible to those who aren’t. He also offers a very entertaining “insider” view of the less glamorous side of Hollywood — working and struggling actors, set designers, directors, etc. While some are “types,” none are stereotypes. The pacing is good and there’s even a bit of suspense, and just enough sense of danger (Could Harry’s plans go horribly wrong?) to keep you turning the page.

Possibly another reason for the story’s appeal is that while it reminds us that plagiarism has always been an issue, it also deals with the contemporary fear that putting your ideas, writing, photos, pets’ names or anything else out in the digital world is a risky endeavor.

To be clear, this is an entertainment, not literary fiction. While some readers might have hoped for more play between the 16th century and the 21st, this is not John Fowles. (That may come as a relief to a few of you.) However, it is the type of book that if you are reading it on a plane and the flight attendant comes around to remind you to turn off your electronic reading device because you’re about to land, you might just hide the Kindle between the covers of a magazine (much to chagrin of your better-half) and keep reading.