I am now 14% (per my Kindle) done reading A Naked Singularity.

I so want to love this book — a self-published long-shot by a first time novelist that became an authentic underground hit — but so far it’s mostly working as a soporiphic. The sound of it is brilliant. De La Cava doesn’t just have an ear, he is an ear. The characters are colorful, and while many are from the lower-depths, none feel stock. The protagonist a likeable enough sort. But so far I’m not compelled by the narrative itself. I keep waiting for it to start…. 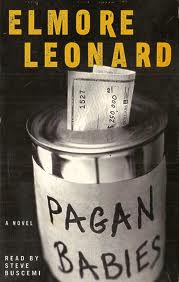 So meantime because I promised (myself) to write about a book every week, this week will be another that I’ve read some time ago – Elmore Leonard’s Pagan Babies.

I can hear the groans now. Elmore Leonard??? Really? Isn’t he a little low-brow, and not low-brow in a high-brow way like Patricia Highsmith or Cornell Woolrich?

The fact is that Leonard, even in his weakest books (and a couple read like he was just riffing for an hour while someone typed) is still unmistakeably Leonard. He may rehash characters (sometimes with different names) and similar schemes come up again and again, but the man has skills. He knows how to “leave out the parts that people skip.” The prose is always in motion, and however thin the plot, it is always in plain sight, propelling the action.

If you’ve never actually read Elmore Leonard’s work, but have already decided you won’t like it, just because, think again, and if you don’t start with Get Shorty, Out of Sight or Rum Punch, all of which were made into fine motion pictures, than you might start with Pagan Babies, Leonard’s sort of foray into Robert Stone territory.

The babies in the title are Rwandan orphans and the book gives a quick and accurate account of the genocide, which takes place prior to the events in the novel. Terry Dunn is a priest in a village, having taken over from his uncle the previous priest who died. Like many Catholic priests in the developing world, he lives with a woman, and drinks. He heads to America to raise some money for the orphans, and also because it might be a good idea for him to get out of town, and finds himself drawn into a scheme involving a lot of types particular to the Leonard-verse.

It’s an entertaining, quick read (even at 334 pages) and the only book by Leonard I know of which takes on anything as serious as Rwanda, even though most of the action takes place stateside, and is not in any way serious.

(Marion has more book reviews on this blog, and you can check out her fiction here.)