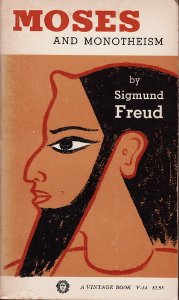 Since I’m slogging through A Naked Singularity and won’t be ready to review it for at least another week or three, I’m stuck writing about a book I read previously. So this week, it’s Moses and Monotheism by Sigmund Freud, which I think I last looked at sometime before the birth of a niece who just graduated college.

You may have already bounced from this blog, or you may be asking yourself, “Why? Why the hell would I want to read anything by that discredited, misogynist fraud?”

Here’s why: No matter what you think of psycho-analysis, Freud was a hell of a writer. He may have been clueless about women. His take on “penis envy” was likely his own projection based on his being a circumstanced Jewish guy with maybe not the world’s largest genitalia, in the land of the uncut German uber-schwanz. And some of the other stuff may also have been personal, more about him than about a theory that explains everything, but even in translation, his prose is sharp and his voice distinctive. He’s got skills!

Moses and Monotheism is an essay written toward the end of his life (1937) when he was on a crap-load of morphine for the oral cancer that was torturing him, and maybe chasing it down with a little of his old favorite — cocaine. There’s an urgency to the writing that makes it easy to imagine Freud composing it the wee hours of the morning, when even doped up, he desperately needed to distract himself from both the physical pain of his cancer, and the spiritual pain of exile as he watched the world he knew come to an unimaginably horrible end.

It’s a short, tight, highly-accessible work — an essay in which he retells the biblical story of Exodus through the lens of psycho-analysis. It’s a great example of taking a hypothesis and running with it over hills and into valleys, cul de sacs, and labyrinths.

Freud goes through the “baby floating downriver in a the basket” fairytale and posits early on that Moses was an Egyptian, and the myth was needed to hide his Egyptian heritage. Then he follows through with much further speculation based on “If Moses was an Egyptian then ….” He writes of Judaic-monotheism’s being rooted in the proto-monotheism of ancient Egyptian worship of the sun god. Because that was primarily a cult of the royals, Freud further concludes that Moses was not just any Egyptian, but indeed a “prince” of Egypt. He further posits that “if Moses was an Egyptian” of course he would introduce the nomadic people he had decided to liberate,  lead and civilize to the Egyptian custom of circumcision.

He continues to (psycho) analyze biblical passages for their hidden meanings, using his Oedipal theory to conclude that at some point Moses’ “people” rebelled and killed their (father) leader. He sees in the story of Exodus, the cover-up of a great crime.

In terms of how to how to deconstruct a text, create and solve a puzzle, and impose an original new text – it’s a masterful job, and one from which we can all learn. Whether or not any of it is “true” is another matter entirely.