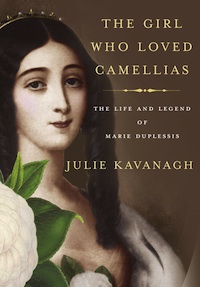 As far as I know, Julie Kavanagh’s The Girl Who Loved Camellias is the only full-length English language biography of Marie Duplessis, a name that few Americans would recognize. The author herself mentions her need to study French in order to read what other writers had to say about Marie, including several who met her. The problem is that few of her letters survive and she kept no journals or diaries that anyone is aware of, so what we know about Marie is always based on how others saw her and remembered her.

In her lifetime, she was a well-known courtesan – a fashion tend-setter who could often be seen at the theater or at her box at the opera, a woman whose name was mentioned in whispers. While she wasn’t invited to the places where she might mingle with “respectable” women, her home became a salon to some of the most well-known and accomplished men. If she is remembered today it is primarily as the woman who inspired the opera La Traviata and the Greta Garbo movie, Camille. Of course, long before Anna Netebroko put on that red dress, there was a novel, La Dame Aux Camilias, written by a young man with a famous name – Alexander Dumas fils. When the novel came out, shortly after Marie’s death at age twenty-four from “consumption,” it was viewed as an account of their relationship, though Dumas admitted that much of it, including the idea of the whore with a heart who makes a great sacrifice for “love” was pure fiction. Once the play of the same name became popular, Marie as Marguerite Guatier belonged to the world.

While the book is heavily sourced, Kavanagh quotes often from the Dumas novel and play, even though these are both fictional portrayals. The author sometimes speculates, for instance wondering if the close relationship Marie had with another courtesan had a “sapphic” character, but also telling us that if it did, Marie would have kept that to herself. Later Kavanagh imagines that a “friend,” who was said to have been staying with Dumas while he was writing his book, might have been another of Marie’s lovers, and the true inspiration for the character of Armand, but she offers no evidence that Dumas was more than causally acquainted with that particular rival.

The book is useful for learning about Marie’s milieu, the demimonde, and its interaction and connection to the larger world. There is no modern-day equivalent of the great courtesans. These were women who were celebrated and known. They were independent operators who could choose their alliances, at a time when women had few choices. Unlike the ladies who could not be present when men gathered to speak frankly of ideas, politics and even art, women like Marie were expected to be there and participate.

But there are mysteries at the book’s core which are never solved. How did uneducated, abused Alphonsine Plessis manage to transform herself into the glamorous and wealthy Marie Duplessis? That is, we know who kept her and have the dates, but why her? What was it about her in particular? It’s hard to know how Marie actually “felt” about anything. She was known to lie, having once quipped, “I lie to keep my teeth white.” Often people who knew her wrote entirely different versions of the same events. So while Kavanagh manages to fill in some blanks, we are left with an empty space at the center, and the question remains: Who was Marie Duplessis?

This is a new release and a bit pricey. The Kindle version is $13.99, and the hardcover is on sale for over $16. There’s no paperback yet. If I wasn’t especially interested in the subject of the biography, I would have waited for the Kindle price to come down or reserved it from the library