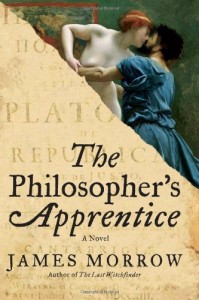 After hearing an interview on NPR with author, James Morrow, I went to a bookstore (Remember those?) to search for a copy of his then new novel, The Philosopher’s Apprentice. I couldn’t remember the title, but when I described the plot – teacher, remote island, mysterious happenings — the clerk thought I was talking about The Magus, a book which bears almost no resemblance to this one. The Island of Dr. Moreau would be getting warmer.

The island here is off the coast of Florida, the teacher a brilliant philosophy graduate student who has just blown his thesis on principle. . He is offered a job by a billionaire scientist who tells him her teenage daughter was in a diving accident and suffered damage resulting in the loss of her moral conscience. His mission is to guide her in developing a sense of ethics. It’s an offer too tempting to refuse, especially given the $100,000 salary. Of course, once he arrives, things aren’t what they seem and yadda, yadda, yadda.

Most of the action takes place years after the island sojourn when his pupil has made her way into the world, intent on changing it.

While the book clearly falls into the sci-fi genre, the author is after bigger fish, taking on bioethics and religion with satiric aim. Whether or not he succeeds may be subjective. The better-half felt Morrow went too far and sometimes missed the mark. (Several reviewers agree.) But I found the story entertaining and thought provoking throughout though at times Morrow’s reach may have exceeded his grasp.

While a knowledge of western philosopher (among other things) is not a necessary prerequisite to the enjoyment of the book, it couldn’t hurt. It’s certainly worth checking out especially for well-read fans of satire.

(Apology: I have been slow on getting these reviews out and didn’t post last week. I guess I’m kind of depressed because my own books haven’t been selling lately. Check them out, why don’t you?)