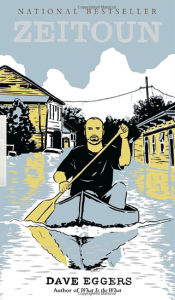 I would first and foremost recommend this to anyone who does not actually live in America, and whose stereotype of Americans is fat yahoos with guns. Off-topic but whenever I’m in say Guatemala (which is more than you might think) I’m always amazed at how much people there don’t hate me because I’m an American, how they really do understand there’s a difference between “the government” and “the people,” and know that it is both prejudice and bad manners to make assumptions about individuals based on their nationality.

Zeitoun is the story of the brave and noble eponymous hero, Abdulrahman Zeitoun and his wife Kathy. Zeitoun chose to stay in New Orleans during Hurricane Katrina although his wife and children evacuated. He helped other stragglers until he was rounded up and swept into a nightmare.

The word I’m avoiding here is Kafka-esque, which seems too small somehow. Kafka wrote fantastical fiction. What happened to Zeitoun was completely real, and while rampant Islamophobia no doubt played a part, so did garden variety racism, zenophobia, and bureaucracy. There were many Zeitouns whose stories are less known. There were too many bodies left to rot on flooded streets, too many stranded on rooftops waiting for help that never arrived. It’s still amazing that no government official was ever charged with anything, that W avoided jail and impeachment, that his buddy Heck-of-a-Job-Brownie merely had to resign his job – and then only after a lot of bad press.

One thing I love about Zeitoun is that it’s a story of the America I know. Not only is it an America of immigrants, but one that tolerates difference. Zeitoun isn’t simply about a man caught up in a moment of history, it’s about character. It’s about choosing again and again to do the right thing even when it isn’t the easy thing. It’s a book that makes clear that a sense of community is not incompatible with the desire to carve out your own piece of the dream. In fact, they are both as American as apple pie.

This is a book that your book club should be talking about, your high school should require, and everyone should read.

(Update: 5/7/13 – Despite being something of a news junky, when I wrote this review back in March, I had completely missed all the stories regarding Zeitoun’s arrest for assaulting his now ex-wife in July, as well as other allegations against him and questions.)