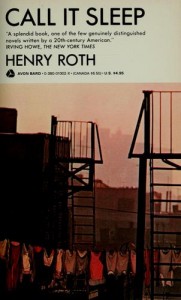 In researching the book’s history, I found though it was greeted with critical acclaim when it was published in 1934, it didn’t sell well, and went out of print quickly. It was reprinted with some fanfare in 1964 when it became the first paperback to receive a front page review in The New York Times Sunday Book Review.

The 1964 paperback edition is the one I own, culled in my adolescence from my parent’s basement. Despite being a voracious reader, even of books written for adults, I found it a tough slog at first, but my father saw me with it and said, “That’s a great book.” The way he said “great” I knew he meant more than merely a good read, and I knew if I didn’t finish it, he would have been disappointed. Soon I found myself immersed in the world of the very young protagonist, six-year old David Schearl.

It’s quite a technical feat to write a novel in the close-third person point of view that manages to convey a world through a child’s eyes, while allowing the reader to see what he’s missing, what he can’t yet figure out. We’re in his head, but our perspective is always bigger than his.

The author only “cheats” by providing a short prologue with an omniscient point of view, and while its focus is on one particular family, it begins with a sentence that encompasses millions of stories:

“The small white steamer, Peter Stuyvesant, that delivered the immigrants from the stench and throb of the steerage to the stench and the throb of New York tenements, rolled slightly on the water beside the stone quay in the lee of the weathered barracks and new brick buildings of Ellis Island.”

The novel begins when David and his mother arrive from Austria to live with his father who came several years before. It’s set in the slums of New York City’s Lower East Side in 1907. The story concerns the family’s more than awkward reunification — marred by his parents’ very different temperaments, as well as past grievance and suspicion.

All of my grandparents came to the United States from eastern Europe only a few years after the time in which the novel is set. The world being described is the one they’d lived in, but here it is laid bare – stripped of myth, wishful-thinking and whitewash.

This is not an easy read. Much of the dialogue is written as the broken-English “dialect” of the streets. David is exposed at his young age to much more than he should be, much more than children are usually exposed to in novels, even those that deal with hardship. Despite the author’s avowed Marxism, the book is not a polemic. David perspective is limited, but he sees everything and observes more like a future poet than any kind of rabble-rouser. There’s great artistry here in Roth’s ability to create characters like Genya, David’s mother. Even seen through a child’s eyes, we know her as a woman with a complex emotional life, and most certainly unlike the sentimental stereotypes we may hold of these true urban pioneers. This is not a John Steinbeck novel where the workers’ struggle is at the forefront. It is not a cry for revolution and social justice. It is a classic work, uniquely modern, yet realistic, and well-worth your time and trouble.

(Call It Sleep is not available in Kindle, though you can find it new or used through Amazon at prices even lower than most of the self-uploaded-trash people are peddling on the Kindle device. Speaking of which, for another perspective on the Lower East Side, several generations after the events in Roth’s novel, you could take a look at this one, which like Call It Sleep may not have received the attention it deserved upon it’s first printing, but could one day be a classic [she said with tongue not completely planted in cheek).