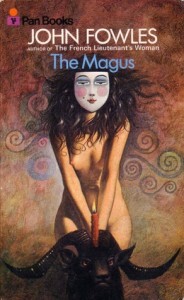 The Magus is much more accessible than other classics such as Moby Dick or Ulysses, but it’s still a BIG book with BIG ideas, and though some may find it a page turner, others may just find it … long. It’s also undeniably “literary” filled with philosophy, allusions to other works, foreign phrases, and tricks. I wouldn’t recommend it to those who don’t generally read fiction, or people who normally stick to one or two genres, or the impatient. However, for a certain kind of reader, The Magus is the ultimate beach/vacation book, and an essential read.

About the plot:  A young man, Nicholas Urfe,  goes to a small Greek island to teach. He meets a mysterious older man, who at first – for no reason he can imagine – seems to be playing strange tricks on him. Mind games. These games become more elaborate, even dangerous, and involve an alluring young woman.

But what’s the end-game? Why is the old man manipulating him?  Is it merely for his own amusement? Is there a higher purpose, a meaning to the scenarios in which Nicholas must participate?

Some detractors find the book dated. It’s of its time (the early 60s) certainly. But young men like Nicholas – unformed, self-centered, callow, searching for meaning, dissatisfied with their present and the possible futures before them, still exist. It’s a credit to Fowles’ genius that a reader can leave his or her reality, and see the world through Nicholas’ eyes, sympathizing with our “hero” even while we might want to slap him.

It should be noted that a novelist’s work is never done, and Fowles published a revision in 1977. (The lurid cover here, is from the original.) If you’re buying used, make sure your copy has the foreword by the author to the newer version. (To view The Magus on Amazon, click the book cover in the widget above.)

There’s also a movie starring Michael Caine, Anthony Quinn, and the awful Candice Bergen. I haven’t seen it, but having seen The Group and Soldier Blue, I can only guess how wooden and dreadful young Candy must have been. Despite having a screenplay by Fowles, the film is a legendary mess. Woody Allen famously quipped, “If I had to live my life again, I’d do everything the same, except that I wouldn’t see The Magus.”

3 thoughts on “The Magus — Your Saturday Book Review”