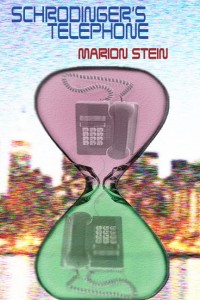 One of my writer friends recently asked  if anyone wanted to participate in a “next big thing” blog series where writers discuss works in progress.

I’m not ready to discuss my next big thing. The big thing I’ve been working on, I haven’t been working on enough and I can’t give a date.  However, my next small thing, will be ready soon.  It’s a novella that may surprise some of my readers.  It’s a lot “softer” and more “family friendly” than either The Death Trip or Loisaida.

I’m still working on a description that doesn’t involve spoilers.  Not quite sure how to do that.  Let’s say it’s kind of Philip K. Dick meets Flannery O’Connor with a nod to Marge Piercy.  Meantime, if anyone is interested, here are the first 500 words:

While others thought that living in the past was harming Lizzie, she knew it was the only thing keeping her sane, and would often revisit the early fall day when the course of her life changed.

Technically, it was still late summer, school having started the week before.  She spent most of her vacation preparing for the term.  Her lesson plans were detailed and specific down to the handouts.  Any other year she might have woken up without the ring of the alarm clock at 5:45.  But in those days, she found herself falling into bed early and waking with reluctance.

She had to punch in at 7:50, and while work was only a ten-minute walk away, she needed a lot of time in the mornings.  Jeff was already in the kitchen.  She could hear the clang of last night’s dishes, now dry, being returned to the shelves. He didn’t have to be at work till nine, could catch the train and be there in half an hour, but he was typically the first one up, out the door for a quick jog with Asta.  She worried about his being out so early with only a small terrier for protection. They lived in the upper part of the upper west side, just south of 96th street, known then as “the great divide.”

Jeff, though protective of her, never thought much about the crime.  He’d gone to Columbia and had lived in a dorm even further uptown.  That wasn’t something Lizzie could imagine herself doing. That woman gang raped in the park last year, it was still on people’s minds, and things seemed to happen every day.

For a moment, she thought she smelled coffee.  Maybe it was something wafting in through the window. Her husband had given up the evil brew in sympathy.  While she told him it wasn’t necessary, she was grateful.

Jeff came in to the room carrying a small tray.  He sat down on the bed.

She answered by rising quickly and running into the bathroom.  Just a belch this time.  It was the end of the first trimester, and it had been getting better.  She brushed her teeth. Years later she would remember everything so clearly, even that she had been startled by what she thought was a cockroach scurrying on the floor, but it turned out to be some loose thread, maybe from a frayed sock.

She came back to the bedroom and sat down next to her husband on the side of the bed.  “Uuurhh,” she grunted.

“No, not really. It’s just…” She trailed off and grabbed one of the bland cookies he’d brought her on a tray.  Then she took a swig of the hot concoction in the mug, “I’m so damn tired of Postum.”

He smiled and shook his head slightly. She would recall thinking just then, not of the future, which she often did during her pregnancy, but about the first time they met.  Some party where the music was so loud they couldn’t hear each other, but looking into his sweet eyes, she felt he already knew her in a way that no one else ever had or would. She kissed him.  He seemed surprised, but pleased, and kissed her back. There was more. This hadn’t been part of the morning routine of late. He was already being careful with her. Gentle. After, they showered together, though he never liked the water as hot as she did.

2 thoughts on “My Next “Small” Thing”